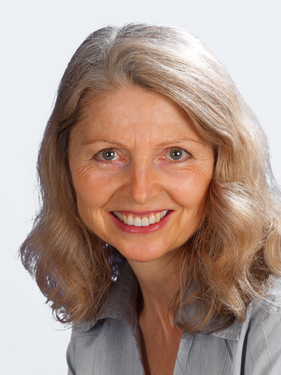 To know oneself and to understand the human nature were motor and stimulus for Veeta`s comprehensive search over many years. As a young woman she started her education in Humanistic Psychology with Inge Heinrichs, a German group leader and psychoanalyst, training in breath therapy, bioenergetics, primal-therapy, encounter and Zen meditation.

This initiated an emotional opening and at the same time - effortlessly - intensified her spiritual development. Veeta went to Nepal where she spent two years in the ashram of Swami Yoga Chinmaya, an enlightened guru, deepening her spiritual path.

Understanding intuitively that the spiritual is only one part of the human reality, she came back to Europe and continued her psychological education. She studied dream analysis and casriel cherapy for four years with Kristian Dahl-Madsén, psychoanalyst and casriel therapist, in Sweden.

In 1992 she met her husband to be, Artho Wittemann, who introduced her to Parts Psychology and the school of Voice Dialogue, founded by Dr Hal and Dr Sidra Stone, USA. This started an intensive phase of inner exploration and studies for both of them that stretched over some twenty years. Collaborating in their psychotherapeutic practice as well as in seminars and trainings, their efforts to understand the complexity of the human psyche gradually resulted in the teachings and methodology of IndividualSystemics. Today they teach their many new insights into the architecture of human nature.

To be a part in creating a new path for human development which connects the personal aspects with the transcendental reality of human nature is another fulfilling phase in Veeta´s ongoing journey.

Veeta and Artho now live in a small village in Sweden where they offer process work to individual clients.

Please register for our Newsletter!

Try again
We use cookies to enhance our services. By continuing to browse this site, you agree to this use.
Ok
More Information